I met up with one of the photography groups I belong to at Santa Cruz’s Walton Light Station for sunrise this week-end.  We hoped for more clouds, but the weather changed from cloudy to clear late in the week so we knew it wouldn’t be very colorful, and yet there was some warm color, and a lovely glow low on the horizon as the sun was approaching. 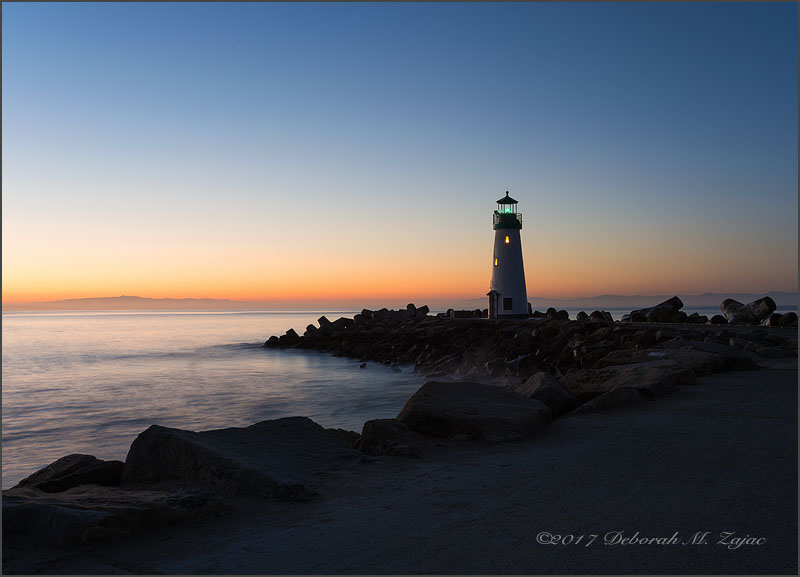 But turning to my left looking northeast across the channel  there were clouds and some color.

For the history buffs:

“Located at the northern end of Monterey Bay, Santa Cruz Harbor is a haven for fishing craft and vessels. A harbor light, located at the west jetty, has marked its entrance for forty years. The original light was a box light structure which served from 1964 – 1996. It was replaced by a cylinder nicknamed “the water heater” which was used from 1996 – 1999. From 1999 until May 2002, a simple pipe structure held the light which marked the way into the harbor.

In 1998, the Santa Cruz community, under the leadership of Bill Simpkins and Jim Thoits, proposed replacing the unsightly harbor light with a lighthouse of classic design, adding a little more character to a community renowned for its characters. Fundraising efforts began in earnest, and with the contributions of many people, including a major donation from Charles Walton of Los Gatos, enough money was raised to begin construction of the new lighthouse in 2001.

The lighthouse, designed by Mark Mesiti-Miller and constructed by Devcon Construction, Inc., stands 41 ½ feet tall above the level of the west jetty, and 59 ½ feet above the mean low water mark. It weighs 350,000 pounds and is built to withstand a quarter million pounds of wave energy.

The construction began with a cylindrical inner core which houses electrical equipment and a circular staircase of forty-two steps which lead to the top of the lighthouse. Surrounding the inner core is a network of reinforcement rods, onto which “shotcrete” was blown and then hand-troweled to form the conical shape. These shotcrete walls are 4 ½ feet thick at the base. Finally, a durable weatherproof white finish was applied to the exterior of the lighthouse and a copper roofed lantern room topped it all off.

On June 9, 2002, the new harbor lighthouse was dedicated, and the signal, a green light flashing every four seconds at a focal plane of thirty-six feet, was activated. It is named the Walton Lighthouse, in honor of Mr. Charles Walton’s late brother, Derek, who served in the merchant marines and was lost at sea during World War II.” ~lighthousefriends.com

It was worth the O’Dark Thirty wake up alarm, and drive over the hill I thought.

We’ve had a stormy few days here in the San Francisco Bay Area with welcome rain.  In between breaks in the storm I headed to the coast for sunset.  The sun broke out of the clouds for a short time bathing Lighthouse Point, and W. Santa Cruz in glorious sunshine.

After photographing the Harvest Moon (image here) last Friday night I was walking up the hill to the car when I couldn’t help but notice, and remark how lovely the West Cliff Inn looked all lit up, and her transom window over the entry door looked lovely too.

My friend replied, “There’s your next door!”.    Don’t you love friends that support our thing for doors? I do! 🙂 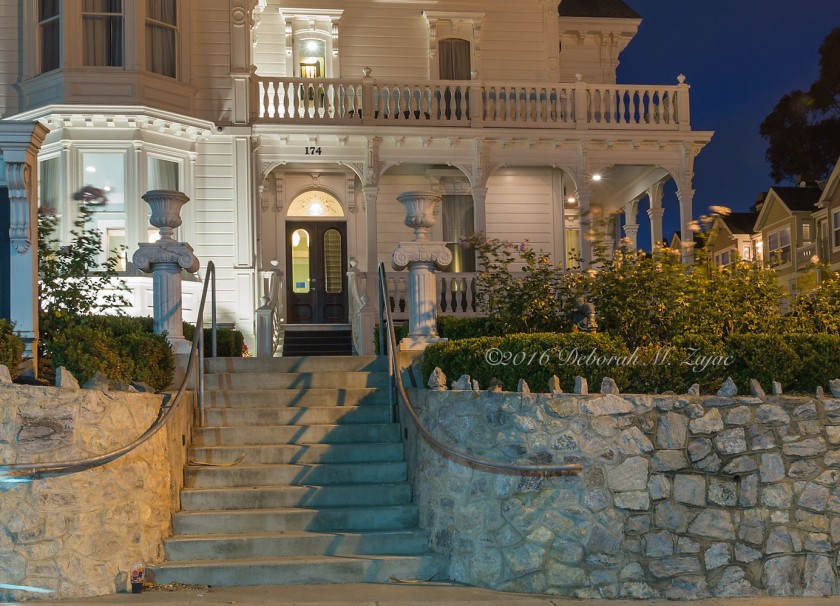 “Most of those who descended on California during the Gold Rush never struck it rich. One exception was prospector Sedgewick Lynch, a carpenter-turned-49er who made his fortune in the gold fields, then made his way to Santa Cruz. Lynch continued to use his carpentry skills; he built the original Santa Cruz wharf, among other local projects.

In 1877, Lynch built his family manse on a bluff with a commanding view of the ocean, just a short walk from the lighthouse.  The Lynch House was among the town’s most prominent residences, constructed for the then-startlingly high cost of $12,000. The house was initially the only home on the cliff, but by the turn of the century, similarly grand neighbors joined it, giving birth to the nickname “Millionaires’ Row.”

Over the next hundred years, the Lynch House morphed from family home to hospital, to office space and vacation rental.  By 2004, it was dilapidated. But the Italianate Grand Dame of West Cliff Drive was in luck; the new owners wanted to save the historic property, so they undertook a complete renovation to the building.

Four Sisters Inn’s President Shelley Post collaborated on every phase of the rehabilitation project, and her strong knowledge of what guests want influenced many design decisions. For example, soaking in a large tub after a long day at the beach is on Shelley’s list of favorite things, which is why almost every room soon had a deep soaking tub.

Work began in 2004, and by June of 2007, the Lynch House was as beautiful as ever, ready to welcome Santa Cruz visitors under her new name: Four Sisters Inns.”~westcliffinn.com

I remember when the house was looking quite run down. I am so happy it was restored and converted to  a B&B and preserved as an Historical Landmark in 2007. It looks beautiful today.

A friend and I went over the hill to Santa Cruz, CA this month to photograph the Moon rising above Walton Lighthouse.   We both really like having water in the image, and pretty foregrounds.

We knew there wouldn’t be much time to shoot since the Moon would need time to climb to get above the Lighthouse, and it’s getting dark earlier.

When we got out of the car and looked at the horizon and lighthouse we groaned. There was a thick band of fog just sitting on the horizon.  We wouldn’t see the Moon until it got above that! Time wouldn’t be on our side.

The sun had set and the sky was getting darker…finally I saw the top of the Moon above the fog bank.

The Moon got high enough for me to make it out almost completely.

It finally got out of the Fog only to be obscured again.  I tried to get a few more images, but it was getting too dark to keep the foreground in the image, and I wanted that.  I was also a bit frustrated with the wind, and shaking from the passing cars which shook my rig, and the pier I was photographing from. I deleted quite a few blurry images.

The color of the Moon was gorgeous though, and it was big being so close to the horizon. It would have looked much larger when it was just above that tree line if I could have seen it then.  Maybe next month. 🙂

“The September Moon is called the Harvest Moon or Corn Moon because this is the time to finish harvesting the corn and other crops before Winter. The bright moonlight gives farmers a little extra time to harvest their crops before the first day of Fall. “~sfgate.com

The July Full Moon is called the “Buck Moon” in North America because male Deer are usually beginning to grow their antlers again in July.
The July Full Moon also has two other names. The Hay Moon; July is when Farmers begin storing their Hay, and the Thunder Moon because of the many thunder storms in the month of July.

I made this image in Santa Cruz, CA. The Moon looks large because it’s close to the horizon. Being on the coast there was a lot of moisture/atmosphere in the air, and the fog was slowly rolling in from the southeast so, the Moon looks a bit diffused.

The Moon was so pretty in the pink reflected light of the Belt of Venus. The pink part of the sky after sunset is called the Belt of Venus. It’s a phenomenon that happens after sunset and before sunrise. “The dark band of the Earth’s shadow at dusk and dawn often has a light pink arch above it, known as the Belt of Venus. It extends about 10-20 degrees up from the horizon, acting as a boundary between the shadow and the sky. The effect is due to the reddened sunlight being backscattered in the atmosphere, which produces the rosy glow.”~http://www.howitworksdaily.com/what-is-the-belt-of-venus/

as the Moon rose higher it began to turn more Golden.

Then it was time to head home.

I went over to Santa Cruz on Saturday while we had a break between rain showers to photograph Allen’s, and Anna’s Hummingbirds. It was a lovely day in the Arboretum.

There were very few people there since the weather wasn’t ideal.  While I was waiting for a male Allen’s Hummingbird to return to a favored perch I looked behind me and saw a lovely female Anna’s darting around the Ericaceae plants which is a succulent plant.

Here’s a series of 3 images that shows her approach to the plant, feeding, then resting on a perch.

I love the fresh Spring color palette in this series, and this pretty little Hummingbird.