I have been out photographing things but didn’t post last week so I thought I’d share some of what’s going on and what I’ve been photographing.

There’s a BIG event here at the end of January called Eagles and Ag. Ag short for Agriculture.  The Ag is grass, Cows, and sheep that eat that grass. During Calving season which is now, Eagles and Hawks make an appearance to feast on the afterbirth.

Anyway, there are talks and tours on private ranches and lands.  This was the third year I tried to get in on some tours and I finally made it to not one, but three tours! YIPEE!

One of the tours was called the Owl Prowl.  I saw Great Horned owls… too far and behind lots of branches to make good images of, and two Barn owls…I was too slow and far away so didn’t get a good shot of them while they flew by. Sigh, but I did get one Great Horned owl shot, sadly, I clipped one wing.  I was still thrilled to see it. Birds SCORE! Deborah not so much. 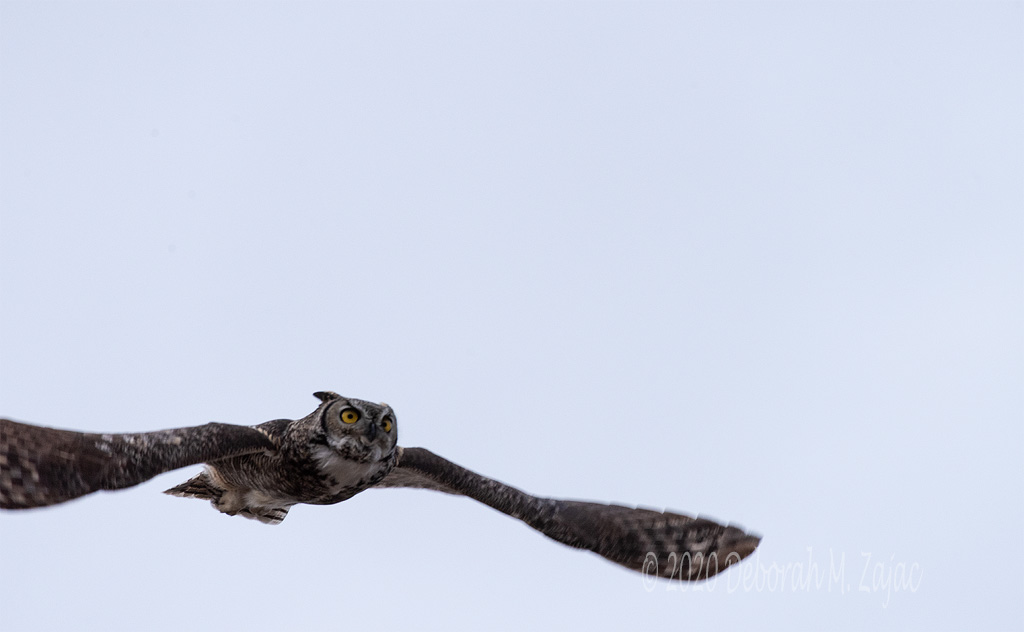 I saw two American Bald Eagles, but they were so far away for my lens. I got a good look through the guides spotting scope though- no photo sorry.

We toured the wetlands behind my house and I learned a lot. These wetlands are private property and the only time the public can get in there is on this tour or you’re a member of Incline Village Hunter’s club.  The wetlands are where Incline Village drains their effluent water which creates a wonderful habitat for shorebirds, and wildlife and they have treatment ponds out there to further clean the water where it eventually flows back into the Carson River, and some are reclaimed to water a golf course or two.

It wasn’t very birdy, but the reflections in the ponds were spectacular. That’s the Carson Range.

A few days after Eagles and Ag a couple of girlfriends and I went snowshoeing and on the way home, we saw a family unit of American Bald Eagles in a tree not far off the highway! We stopped! Almost out of range for my little Lumix FZ200, but still a nice look I think.  That’s Dad on the bottom, Mom and Jr up at the top.

Then I went to Baby Girl’s for our Littlest’s first birthday party and I did a Cake Smash Photoshoot.  Baby Girl and I collaborated on decorations and props. I think it came out alright.  I did a pre-cake smash session followed by a nap, and feeding then the cake smash.

He wasn’t quite sure what to do with the cake, but curiosity got the best of him and he dug right in as you can see!  I just LOVE his curls!!

We had another dusting of snow, so my girlfriends and I are heading to mountains a bit north of here to snowshoe in a new place today. I’m hoping to see some Chick-a-dees. They’ve been known to eat right out of your hand. I hope that happens!

That’s about it. I hope your week is off to a great start and continues to be a good one!

55 thoughts on “Whatever Weds. This and That”