In December the Nevada State Railroad Museum located in Carson City, NV rolls out N°25 to drive The Santa Train.

You know when I went to the Railroad Museum before she wasn’t out that time. click here to see that post.  I’ve wanted to get back up here to see the Steamie since.

Just as I did before I arrived early hoping to see the crew rolling her out of the garage, but I was a wee bit late she was already out and building pressure.  N°25 was built in 1905 by the Baldwin Locomotive Works.  She’s a 78-ton 10-wheeler. She hauled both passenger and freight cars between Carson, Virginia City, and Reno from 1911 to 1947.

Now she runs on special days throughout the year.

One of the special events she’s rolled out for is during December when she’s The Santa Train which is  N°25, a passenger car, and a red caboose. Passengers come for a ride around the station and Santa Claus is on the train to talk to the children, and I hear he passes out candy canes to everyone.

Here she is at the station getting some water, and passengers.

I spy Santa!  He’s with the Conductor, Engineer, the Brakemen, and some Elves disguised as cowboys. 😉 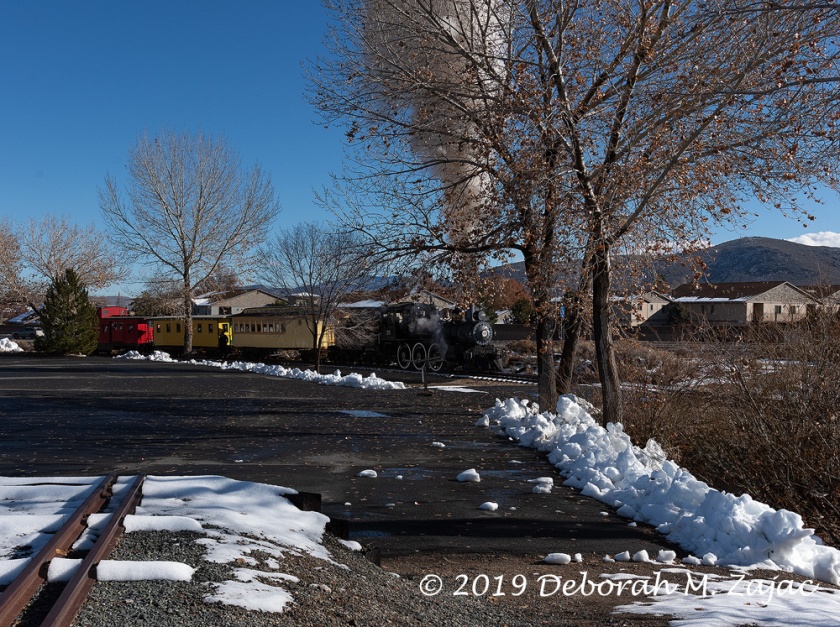 I don’t know if I’ll be posting much anymore this year things are going to get busy pretty quick. Big Baby Boy and The Crosscourt Kitty🐈 are arriving soon for the Holidays and #1 Grandson is coming to visit too!

There’ll be kids jingle belling, holiday greetings, gay happy meetings, and tales of the glories of Christmases long, long ago! It really is the most wonderful time of the year!

In case I don’t get another chance to let me wish you all a very Merry Christmas, Happy Chanukah, and a Happy, Healthy, Prosperous New Year!! xx

Dan from No Facilities blog has been reminding Train Lovers about National Train Day for several years, and I’m so glad he’s sent those reminders otherwise I would likely forget to post the train images I’ve been saving for the day, and how special is it this year?  It’s on my Birthday! I’ve scheduled this post ahead of time because I plan to be birding, or sleeping in when it goes live. 🙂  See Dan Antion’s  Train post on his blog  here.

Last August when we were in Carson City, NV. house hunting ( after nearly a year of looking) we found a house we loved late one afternoon, and we and our Realtor planned to meet early the following morning to write up the offer.

He-Man and I rose really early, dressed, ate breakfast and headed out because I wanted to stop at the Nevada State Railroad Museum before our meeting with our Realtor.  All the months we’d been driving up and down Hwy 395 while house hunting I’d been eyeing the place and wanting to visit thinking it would be perfect for National Train Day plus I really liked the trains I was seeing at the station.

We arrived at the Museum before they were actually open for business and  am I glad we did as we were able to see the Conductors/Engineers roll out the trains from the Shed they’d be using that day, and we got to see them put each of the Motor cars on an old-fashioned manual labor turntable, and switch tracks!

They were so kind and let me take all the photos I wanted. You know,  I stayed well out of their way so not to lose that privilege.  I was good I never crossed an unwritten or written line. Phew!

I have so many images, but I’ve paired it down to a few because I’ve included some information about each Motor car which makes this a long post for me.

The Conductors chatting before work,

The Turntable with an Engineer switching the track: 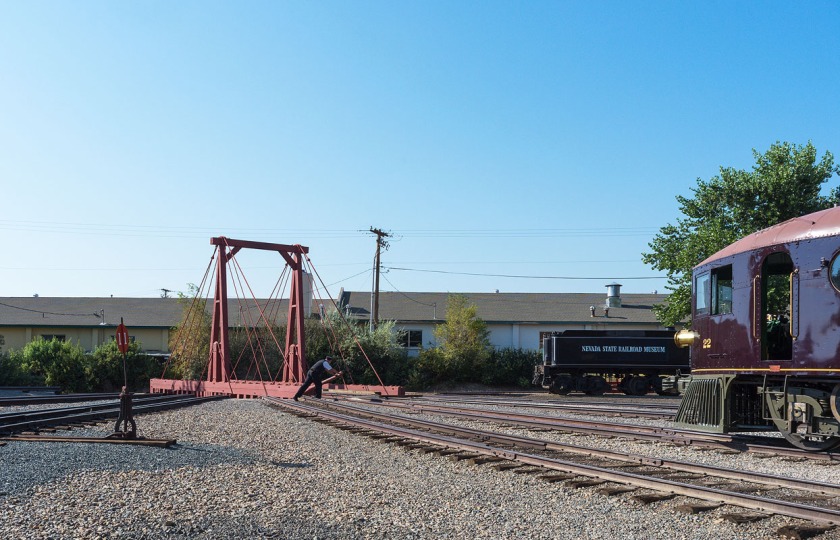 Motor Car 22- Virginia and Truckee – For the History Buffs I gleaned this about the car from Wikipedia.

“Virginia and Truckee Railway Motor Car 22, also called McKeen Motor Car 70, is a gasoline-powered railcar at the Nevada State Railroad Museum in Carson Cityin the U.S. state of Nevada. It was built for the Virginia and Truckee Railroad in 1910 by the McKeen Motor Car Company. Motor Car 22 was operated by the Virginia and Truckee until 1945, when it was sold off and became a diner until 1955. It eventually became the office and storage space for a plumbing business before it was donated to the Nevada State Railroad Museum in 1995. After a thorough study,[2] the Museum undertook a restoration of the McKeen car in 1997. The restored motor car was unveiled in 2010, a century after it was originally delivered to the Virginia and Truckee. Motor Car 22 was listed on the National Register of Historic Places in 2005, and designated a National Historic Landmark in 2012. It is one of a few surviving McKeen railcars, and the only one that is operational.[“`https://en.wikipedia.org/wiki/Virginia_and_Truckee_Railway_Motor_Car_22

” Motor car No. 401 was built by the Edwards Motor Car Co. of Sanford, NC and put into service October 1926 by the Tucson, Cornelia & Gila Bend Railroad of Ajo, AZ. The motor car operated regularly until December 31, 1947 and was finally donated to Travel Town in Los Angeles, California.

The motor car traveled over 783,000 miles while in service, running between the copper mine at Ajo and Gila Bend, a distance of 43 miles. The car was powered by a six-cylinder White gasoline engine that was installed in November 1943, replacing the original after 17 years of service.

The No. 50 received a new 75 HP Cummins diesel engine during the spring of 1997. The diesel engine replaced a 75 HP White gasoline engine. The White engine was installed about 1943, replacing the motorcar’s original Continental engine.

In 1999, the motor car received a new fluid drive transmission, and, before participating in Rail-fair ’99 at the California State Railroad Museum, was painted to reflect its appearance on the TC&GB.”

Both Motor Cars at Wabuska Station waiting for passengers.

One can have a train ride from the Wabuska Station from May to December on the week-ends. I don’t know how far or where they go, but I plan to get that information and ride both cars if time allows, and visit the museum when I return. ( The museum is a short walk from the Station)

I made a time-lapse of the trains coming out of the shed and being put on the turntable from 54 of my still images.  It goes pretty fast.  If I ever start to do more videos I’ll use a dedicated video camera and hopefully do a better job in the developing process.

I wish I could have spent more time there, and ridden the trains, but time wasn’t on our side.  I had a blast seeing the trains come out for the day’s operation though.  I’ll be going back there. They have a Steamie (Steam Engine) too! It doesn’t run all the time. When it does I want to be there for it!

Plus 1 more! It was August and the sunflowers in front of the Museum were in bloom and at peak. I could not resist them!  🙂

I hope you liked this post for National Train Day.

The Inside Track:   Our offer was accepted. We bought the house! We’re renting it out until we can move.