A little more than a month ago Jodi from https://lifeinbetween.me/2017/10/16/peanut-butter-chocolate-triple-layer-cake/posted a cake that checked all my boxes for decadence, and had my son’s aka Big Baby Boy’s favorite candy bar in the world as its theme/ingredient.

Right then I was inspired to make this cake for Big Baby Boy’s November birthday.  Mind you. He hasn’t actually been at home on his birthday since he was 17 yrs old.  He went to college out of state when he was 17, so we’ve been celebrating his birthday when he comes home for Thanksgiving since.  A long time. He won’t like me telling you how old he is now.  It makes me feel ancient just saying that I’m the mother of child that age! So, we’ll just say 29…again. 🙂

The cake.  Okay, mine came out a little uneven, and my chocolate ganache  was a bit too thick to drip as nicely as I wanted it to, but OMG! It’s so delicious, and it looked pretty good despite its flaws. 🙂

Jodi said she saw the recipe over on the blog called Life, Love, and Sugar  here which inspired her to make the cake.  Jodi is a very accomplished baker, cook, and artist so she’s always changing up the recipes she finds.  Me. I like to make the recipe as prescribed the first time, and make changes if needed on the next go round.  I headed over to Lindsay’s blog to check out the original recipe, and decided to use hers b/c she used 8 inch round cake pans which I have, and Jodi’s version had 9 inch ones which I don’t have, and she used milk for the cake rather than half and half which shaved a few calories plus there’s a frosting/decorating video at Lindsay’s which helped me a lot since this cake looked really challenging to frost. 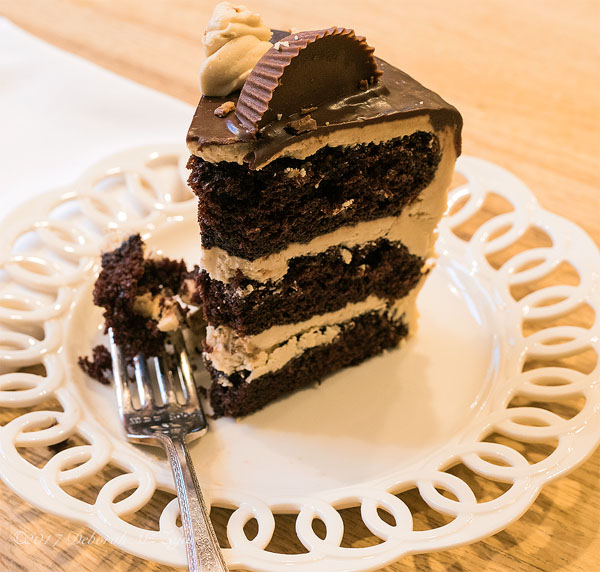 I’ve linked to both Jodi, and Lindsay so you can read both postings.

Thank you so much Jodi for the inspiration it was a HUGE hit with whole family! Thanks for sharing Lindsay’s link too the video was great for me!

I would definitely make this again.  I’d add a wee bit more heavy whipping cream to loosen up the Chocolate ganache,  and figure out how to level my cakes better.  This cake was gone in 2.5 days! 🙂

The finished cake glazed, and topped with chopped almonds. 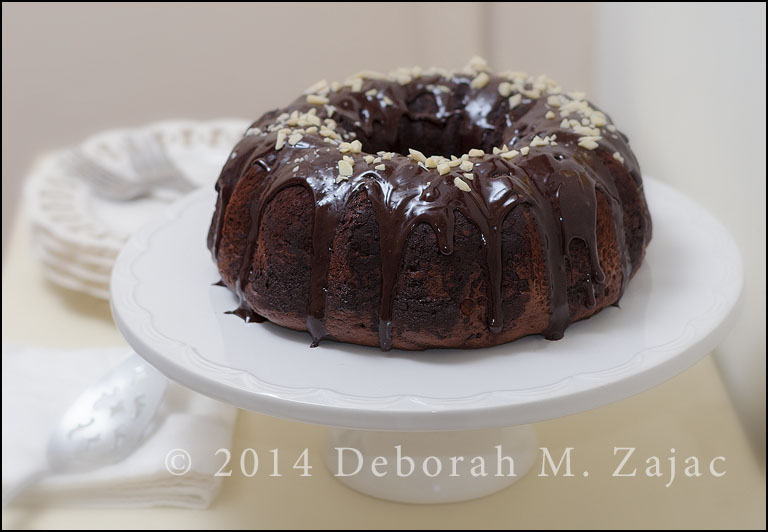 …this cake is so moist, rich, and delicious! The crumb is lovely. It won’t last the week-end!

I hope you have a great week-end!

Addendum: The recipe for the cake is from Taste of Home you can get it here

Notes: After spraying the Bundt or Flute pan with non-stick cooking spray I dusted my Bundt pan with unsweetened Cocoa Powder instead of flour. This keeps the cake from having white flour on the crust.

To make the Chocolate Sauce I melted 1.5 cups of Dark Chocolate Chips with 2-3 Tablespoons of milk then drizzled over the completely cooled cake letting it drip down the sides of the cake. Add chopped nuts if you like.   Enjoy!

Busy morning bakin’. Just waiting for this super rich, moist cake to cool before glazing with a semisweet chocolate sauce.

Addendum: Melissa of http://melissabluefineart.wordpress.com/  is craving a good chocolate cake and asked for the recipe, so for you Chere Melissa here’s the recipe.

This is a recipe from Taste of Home- Ultimate Chocolate Cake

I made the chocolate sauce by melting 1.5 cups chocolate chips with a 2-3 tablespoons of milk. Drizzle over the cake when completely cooled letting it run down the sides of the cake.  Enjoy!