I was pretty excited to see the Great Conjunction as I’m sure most of you were too, so I hoped for clear skies to be able to photograph it. On the 16th of December the crescent moon, Jupiter, and Saturn were fairly close to each other and it was a clear sky so I photographed it from my patio. It was cloudy all day but cleared pretty well but the wispy contrails and remaining clouds made the sky a bit more interesting. Can you spy the ski runs at Heavenly Ski Resort? X marks the spot.

It was clear on Monday the 21st so I went out with my long lens to get a closer look at the conjunction. I had to crop it in for it to be a good look even at 400mm, but I was able to see 3 of Jupiter’s Moons too. The 3 tiny dots are the Moons.

Saturn’s rings are not defined which is disappointing, but I saw the Great Conjunction! Did you look for it?

I wish all those celebrating Christmas a very Merry Christmas, and those who aren’t I wish you a very Joyous Week!

I woke up really early last week and the sky was cloudless so I thought I’d go out back and photograph the Milky Way.  The light-pollution is worse than I remember! This was at 3:49 A M!

Jupiter and Saturn are still shining brightly over the Pinenut Mountains. Mars has marched so far East it’s out of the frame.

What do you do when you wake up in the wee hours of the mornin?

The end of March and through yesterday has been for me, a time of looking up to the night sky.  Starting at the end of March I was looking up to see the Moon, Venus and the elusive star cluster called the Pleiades in conjunction.  This was a practice shot because the night I was hoping to see Venus and the Pleiades closer together on April 3rd we had rain and snow so the sky was too cloudy to see them.  That was a once-in-an-eight year event! I’m just glad I  practiced so I saw this conjunction. 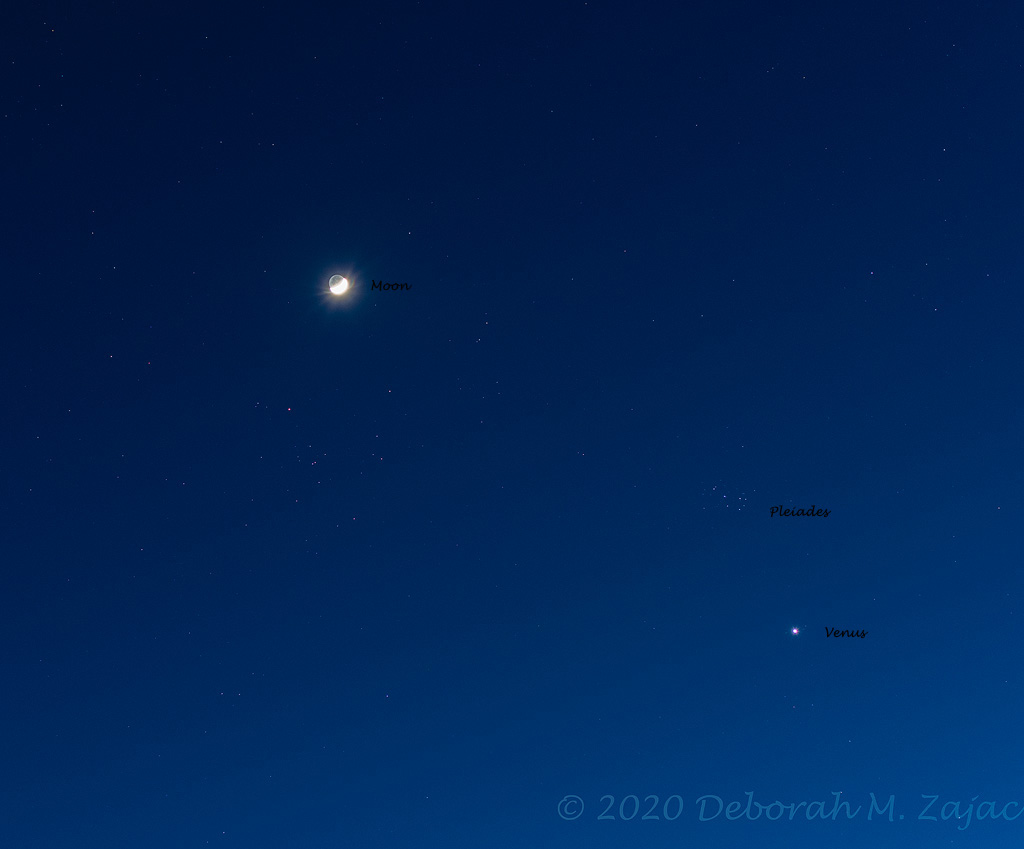 Last night was the Supermoon. It appears just a bit larger than normal because the Moon comes the closest to Earth in its elliptic orbit called perigee.

We’ve been having light rain and snow and it was overcast all day but, we got lucky last night and the sky to the east was clear! I went down to the golf course with my next-door neighbor to photograph the Supermoon rise over the Pinenut Mountains.

Then I switched cameras and made an image of just the Moon.  Our moon looked more golden than pink, but the Belt of Venus wasn’t very deep in color around us either so…golden.

More things that are looking up is that we’ve had 8 people who had the Covid-19 virus move to the recovered side of life! There are still 17 active cases in our Quad county region. There have been no deaths yet. Knocking on wood that continues and that all move to the recovered column soon!

I’ll leave you this thought today.

““Bad stuff does happen sometimes, always remember that but remember that you have to move on somehow. You just pick your head up and stare at something beautiful like the sky or the ocean and you move the hell on.”
― James Patterson, Suzanne’s Diary for Nicholas

Last night I met Gordon, and some other friends in a Meet-Up group we’re in up on Mt. Tamilpias in Marin County to photograph the sunset, and then image the night sky.

There was an Astrology lecture in the Amphitheater so the park was open much later than it normally is which allowed us to stay late. YEAH! Normally the park closes a bit after sunset.

4 planes, and one shooting star flew through the sky while I was imaging. I didn’t see the shooting star at the time as I was looking away helping a friend with her settings and intervalometer. I was thrilled to see I caught it on film though.

It was a lovely night, not windy, or cold, and the company was great!

I went out Friday night/Saturday morning star gazing hoping to photograph a meteor or two of the Perseid meteor shower.  The Perseid Meteor shower is an annual event occurring from mid July to mid August as the Earth crosses the orbital path of Comet Swift-Tuttle; the parent of the Perseid meteor shower.  Debris from the comet litters its orbital path, but we don’t get into the dense part of it until the first week of August.  It’s this debris that slams into Earth’s upper atmosphere at 130,000 mile per hour lighting up the night sky with streaking Perseid meteors.

This year was to be particularly good for viewing more meteors because of our position in the debris path.

I saw a few really great meteors with wonderful balls of fire streaking through the sky, but the best image I made in 4 hours of sky watching was of this little meteor with some red at the head and a green tail.  It’s a first time I’ve photographed the green tail.

There’s some of the Milky Way in there too, but faint, but there were oh, so many stars!

It was a wonderful night for star gazing.

In 2012 I shot my very first Milky Way Pano. I’ve not yet posted it…it is still a work in progress.   Since then I’ve been wanting to improve on the techniques I used in 2012 which was…I won’t lie, ” flying by the seat of my pants”.

One of the things I want to improve is getting better stitching. Even using a tripod,  and generous overlapping I wasn’t happy with the stitching.  I hoped that by calibrating my lens to find the Nodal Point, or No Parallax Point I would get better stitching results.  What is the Nodal Point and why does it matter you ask?  Do this. Hold up your thumb or pen in front of your face at arm’s length, and move your head from left to right. Notice how the background moved on one side more than the other? That’s Parallax. If you were to take two images one from the left and one from the right side and merge them the line would not be straight.  You need to either have the point of view of the pen or the background.

For a great explanation to solve this issue I turn to John Houghton, ” Ideally, therefore, when taking the photographs for a stitched panorama you need to take all the shots from a single viewpoint so that near objects don’t change their position against the background in successive shots.  This will greatly ease the task of  joining the images seamlessly to form a perfect panorama image.  Hence, the “eye” of the camera needs to be kept in a constant position when the camera is rotated to point in a different direction for each shot. “~ John Houghton

Yesterday afternoon I figured out the Nodal Point, or No Parallax Point for my 24mm f/2.8 lens.  I mounted my camera  on my macro rail, and a tripod. Making sure that tripod was level, next making sure my camera/macro rail were level,  then I lined my tripod rig up with a light stand placed a few feet away from the tripod, and a pole I have in the backyard which is further away from the light stand.

Loosening my panning knob on the ball-head I moved the camera/micro rail left and right and could see the furthest pole on both sides of the light stand I had parallax. Then I moved my camera back to the center point moved my camera back using the macro rail adjustment knob. I locked it down and moved my camera right and left again…the parallax got worse telling me I needed to make my adjustment on the rail in the other direction. I loosened the rail and moved the other direction a bit then moved the camera from left to right, and saw I was getting there; I only saw a little bit of the further pole behind the light stand now.   One more small adjustment and Voila! I didn’t see the further pole behind the light stand when panning the camera left and right.   I found the Nodal Point, or No Parallax Point of that lens!

My rail has centimeter, and millimeter marks so I made a note of the number that 24mm f/2.8 lines up with to be able to quickly set up a panorama shot with that lens again.

Now that I had found the Nodal/No Parallax Point I was anxious to test it out. The sky was supposed to be clear so I met a friend at a favorite Night Sky spot to shoot the Milky Way. My goal was to make a Vertorama/Panorama using my new measurement of the Nodal Point.

I made 7 images from left to right making sure my tripod was level, my camera/macro rail were level, and that I had a lot of overlap when panning from shot to shot. Then I returned to the same place I started and panned up a bit to get more of the sky in the frame making sure I had plenty of overlap then moving left to right using the same amount of movement as before I made 7 more images ending exactly at the same place as before. (Note- When I composed the shot  I noted the degree marking on my ball-head to find my starting place and I noted the degree mark for my ending place, so I knew where to start and end for the second row. )

The clouds moved in and when they hit the city lights below they really lit up! I’ve cropped off a bit from that right side.  It was a fairly early night due to the clouds.

I’ll write down each measurement for each lens on my cell phone’s notepad, along with which camera was used, and I’ll upload that information to my computer so I have it there as a back-up as well.

Initial development of the images was done using LR5. Then I stitched this image in Photoshop CS6. Due to the light variation I had some seams showing. I clicked on each layer and using the clone brush fixed those.

All in all I think a very successful endeavor.  I hope next week-end has a clear night so I can get out and do this again.