This bird was on the back fence competing for food with the Yellow-headed Blackbirds making rather lewd calls to scare them off.

He looks a bit grumpy, doesn’t he? 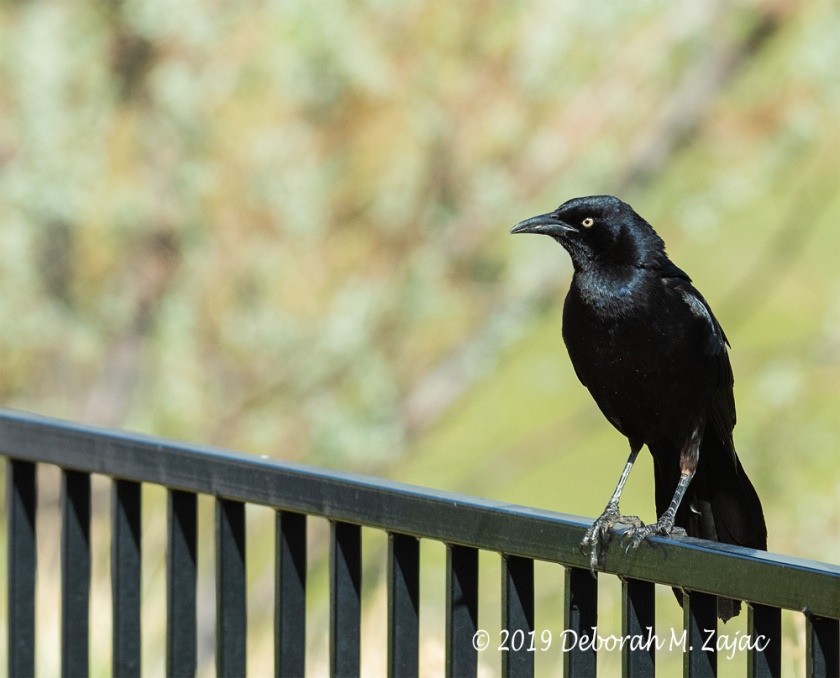 Since we’ve been pretty well settled in we’ve been having family and friends come to visit which is why I’ve been less active on the blog lately.

Baby Girl, the Handsome Surveyor, and the boys came for Mother’s Day and my Birthday, then a good friend stopped by for the night while traveling, and we’ve had Big Baby Boy home for 5 days. Sadly, he’s heading back to SOCAL today.

Both the kids said, “it feels like home!” at the new house and are happy, and like it here too.

The weather has been a bit gloomy lately and driving home from Baby Girl’s Sunday we had snow in the mountains. It was a gorgeous winter wonderland with the tall pines flocked in snow.

On the homefront- I’m still waiting for the countertop for the base laundry room cabinets to come in. The pantry cabinet I ordered arrived damaged and went back, and a wall cabinet got smashed in transit and I’m waiting for that replacement.

The closet shelving in the office and retreat are complete, and He-Man’s Master Closet is finished. He wasted no time filling it up! 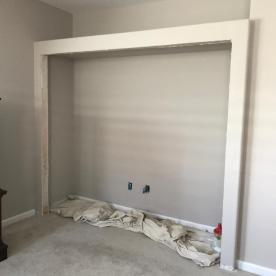 The house in Silicon Valley went on the market Friday.  Here’s hoping for a sale soon!

I hope you all are having a good week!

The Feeder is busy again with House Finches. The females look like they’re molting, but the males are dazzling with their vibrant red heads.

The Black-capped Chick-a-dee makes daily appearances too, but I’ve not got a decent image of it so far this season.

The Mockingbird has a mate and they’ve been busy bullying anything they can.  I caught one with a nice, fat bee last week. Since it didn’t eat it straight-away I’m guessing it went back to the nest with this meal.

A new visitor to my yard this year is a Black Phoebe. Isn’t he handsome?

The female Anna’s Hummingbird prefers the Lantana to the feeder this year so I try to catch her there when I’m out back. She’s lovely when the sun hits her back. 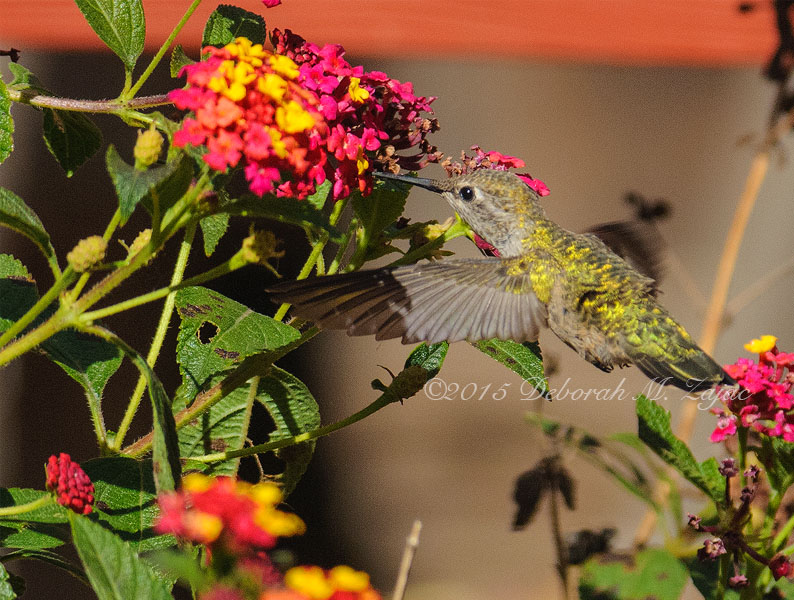 Here’s a macro image I created sometime ago that never made it to my Project 52. I used to set up this engine and a several cars around the Christmas Tree when my kids were little. It’s been buried in the garage for years, but I rediscovered it while cleaning out the garage. It’s a Bachmann Union Pacific Diesel Engine. Now that we have a little one (#1 Grandson) I’ll have to start setting it up again. 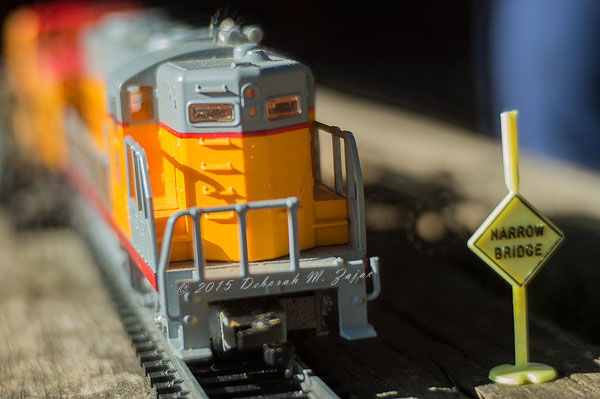 Speaking of the garage, that reminds me it’s been sometime since I talked about our remodel.  It’s coming along very well. They’re right on schedule.

April 29th: Ground-breaking day. It was fun. We had a little digger in the front yard digging out the place for the foundation. #1 Grandson loved that! This is how the front of the house looked before the digger arrived-the foundation’s been planned out-

A lot has happened between then and early June- The foundation was poured, the framing went up, and June 2nd this is how the house looked at the end of the day.

Next week our new front door, and front windows will be installed, the plywood for the roof will be put on, and the following week they plan on breaking through the walls to the house so we need to move to other rooms while the work is being done.

There’s a lot of changes in the Master Bedroom, and bathroom that I’ll share in an upcoming post.

I’m feeling better. I hiked up the steep hill yesterday. It was tough! Probably more than I should have done since I’m still coughing and having sinus issues. What was I thinking? 🙂 Other than that it’s been a quite week-end.

I hope you all are having a great week-end!

When we bought our house there was a partition between the Living Room and Family/Dining Room. It was made of 1×1’s spaced an inch or so apart, and there was plywood on the Family Room side so you couldn’t see into the Family Room.  Oh, and they were stained in a Natural Burch or something. Brown.  I detested it so, I asked He-Man to take it apart to remove the plywood then put the 1×1’s back and open it up. Being the good guy he is he did it. Then I painted them in Dover White.

The most recent image I have of the Partition is Christmas 2014. 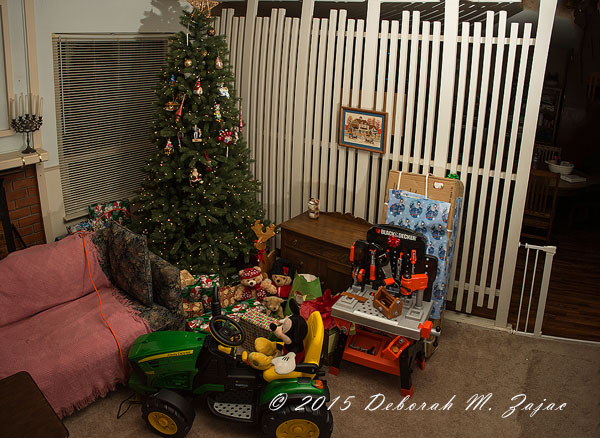 It’s very 60’s, and we really wished we had sound proofing between rooms. There were two more smaller sets of the same slotted partitions in hall way where  two bedrooms and the hall bathroom are, but years ago I had those removed and had the walls extended to replace them, and we enlarged the hall closet.  I’ve loved having the bigger hall closet, and have never missed those partitions!

When we started planning the bedroom addition in September I ask to the contractors to also include removing the large partition and build a wall with a pocket door in its place. Thankfully it was in our budget.

Here’s how it looks finished.

Pardon the chaos in the Living room! I love that Queen Anne Pocket Door! Unfortunately, the large glass pane was scratched either during delivery or while the painting was being done.  Hopefully we’ll get something worked out so that piece of glass is replaced.

We’re loving how much quieter each of the areas is when the Pocket Door is closed. I can sit in the Living room working on my computer and not hear the TV in the Family Room, and they can’t hear my computer when I’m watching movies or Photoshop Tutorials.  We’re wishing we had done this sooner!

Phase II should start sometime in mid April. The new bedroom addition, total remodel of our Master bathroom, the closet in the Master bedroom has to be moved to the other side of the room to accommodate that, and the room will be enlarged a bit because we have to add entry hallway to be able to access the new bedroom.

We’ll be moving our entire Master Bedroom into the Living Room and sleeping there, and Baby Girl and #1 Grandson will be moving to the back bedroom that I now use as my Retreat. Baby Girl’s bedroom is getting a little bit bigger too.

I’ll be documenting the work with photos.

17 days in and the Hall Bathroom is just about finished! Not ready to use because the grout sealer in the shower and floor tiles were just applied today, but we can move in and begin using it again on Friday night. It’s beautiful!

There was a minor “ruh-roh” today.  While installing the threshold a corner of a tile was broken so they’re going to replace that. Once that is done it will be truly finished.  No word on when the replacement will happen yet. It was late in the day so the Boss probably won’t get the Foreman’s notes or our follow up email until tomorrow.

The new wall with the Pocket Door separating the Living Room from my Family, Dining Room and Kitchen  is finished.  There’s a little touch up painting to do where they had to remove the crown moulding, but otherwise it’s done. In Phase Two we’re having the original Sliding Glass Door replaced with a new one that will be double paned and more energy efficient. That door will be in the Family Room.  Which reminds me I need to make some images of that Sliding Glass Door before it’s changed!  It’s a drafty old thing. 🙂

I made images of the work as it was progressing. Can you stand to look at the images? It’s like “Home Movies” isn’t it?  If not just scroll down to the bottom of the post where I have inserted an image of how the Hall Bathroom looks tonight…sans any cute stuff.

Just to remind you of how it looked before:

I spent a full week-end painting the mirror and vanity in a lovely Blue, and I changed all the fixtures to a Brushed Nickle, and the art work is mine. The Brushed Nickle light and switch plates will be used in the Mstrbath in Phase II.

Day 3: Rough Plumbing done for both the sink and shower fixtures. All the walls are up and ready for Texture. 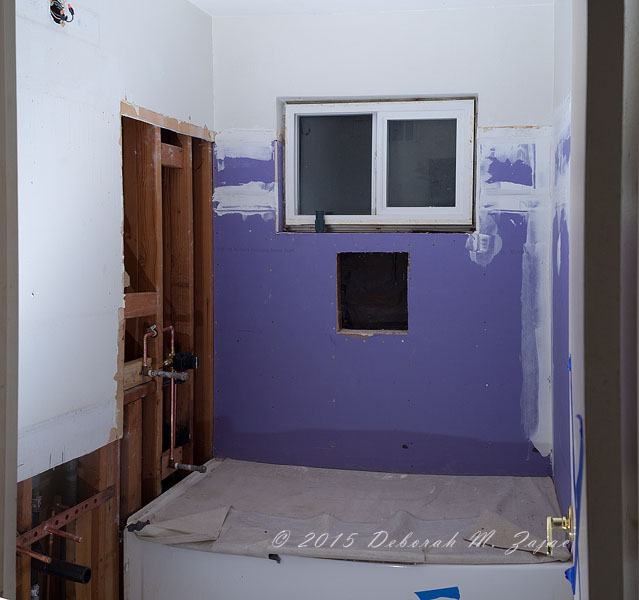 Day 5; Some kind of Mud. They called it “Floating”. (Shrug) Some things…you just don’t ask. You just have faith…right.

Day 6: Oh my! The Tile Guys were amazing. They laid both the shower and floor in a day! 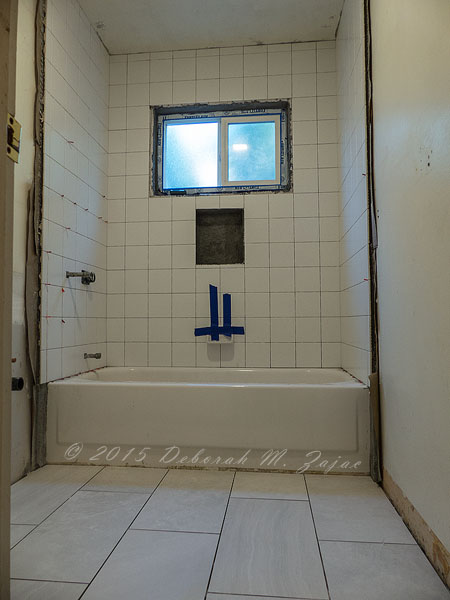 Day 8  the Tape and Texture guy was here. He’s a really skilled guy. I have to say I don’t like the texture on the new wall; it’s too busy and the pattern is too predictable, and at first I found the bathroom texture too “dense, and crispy”, but after two coats of paint it’s really nice.  I still don’t like the new wall texture though.

Day 9: The Painter arrived and painted the Hall Bathroom, and primed the new walls, the pocket door, and in the closet where the new attic space is, and the hallway where we hoped to put the new attic entry, but that didn’t work out so, it was a hole we have to patch. ( everyone sighed)!

I love Sherwin Williams “Dover White”. Nearly my whole house is that color…minus two bedrooms, and the trim. So the bathroom is “Dover White semi gloss.  After he finished the installation Crew arrived and put in the Door Trim for the new Pocket door and cut the vanity top and installed the top and vanity.

Fast forward through the week-ends and you’re now at today.

Here’s the bathroom as it looks tonight with the fixtures and all the cabinets installed.

Here’s a closer look at the floor tiles: 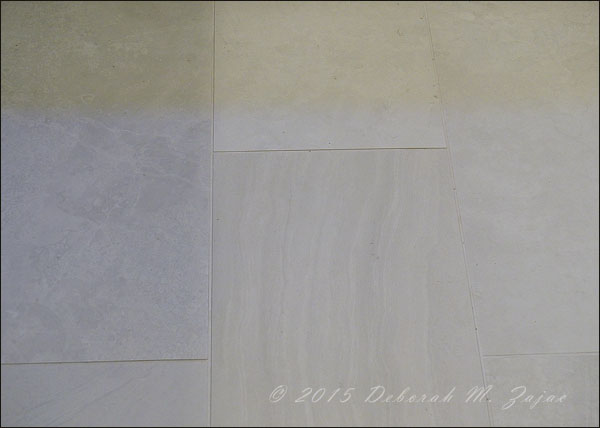 I love how much the floor tiles look like Marble. They’re definitely colder than our old Linoleum so we’ll need throw rugs for sure. I have a bath mat, towels, and cute stuff to put up, but I need to figure out where to put the Hand Towel… I used to put it on the shower door, but I have a shower curtain now.  There’s no room between the sink/vanity and the shower. Any ideas or thoughts from those who have the same issue?

That’s all for now. I’m sure you’re bored to death! So I’ll show you the new wall and pocket door tomorrow.