While over in Minden and Gardnerville, Nevada last Saturday we had a bit of time to kill so I cruised around looking for what else? DOORS! 🙂

The Steeple or Tower caught my eye of Trinity Lutheran Church before I knew what it was so He-Man and I made bee-line to the church.

This may have been the front door at one time, but I think they’re using a door on the East side now.  There were quite a few cars in the parking lot on that side, and I did see a large glass door, but didn’t venture over there thinking there was something going on…possibly a wedding. I erred on the side of CHICKEN, and stayed on the north side of the building.

I really like the brick work in the arch entryway, and blond doors. I’m also a huge fan of brass kick plates.

The church was established in 1877. The first Trinity Lutheran Church in Carson Valley.

The first service in the nearly completed first building was in 1895.  The official dedication ceremony for the newly built church was in 1897.

In 1899 a 1,020 pound church bell that was cast in France was installed.  I’m guessing the tower holds the bell. Sadly, I didn’t hear it while there, but later that afternoon I heard a church bell, and wondered if this was what I was hearing.

In 1918 the use of German was suspended until after World War I.

1941 World War II begins. Many of their members enter the service 3 of which will not make it back.

Kenneth Storke was killed on the island of Luzon in 1945. His Grandfather, Henry Marquat donated the site for a new church also in 1945.

The following year they selected their second building committee, and in early Fall 1953 they held their last service in the old building.

In the fall of 1953 the new church was dedicated. 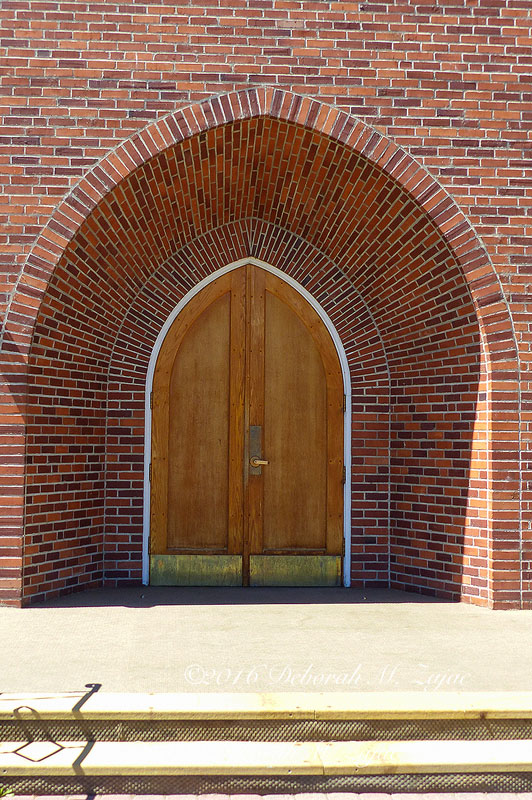 A side door closer look

and two plaques that are on the front brick work near the front doors.

The doors are simple yet elegant, and building is beautiful I think.

I’ll be going back to the area before summer is over we’re looking at houses there, and I will stop by the church to see if I can get a look at the East and South sides of the building…and with any luck maybe a peek inside too. One can hope!