About 6 weeks ago I spent a week-end touring a small part of U.S. Route 66 with friends.

One of the places we stopped along the Route to check out was the WigWam Motel in Rialto, California.

Several of the Tipis’ were empty and had their doors open so I inquired if I could take a peek inside of one; the proprietor graciously allowed me to take a tour of one. The shower stall is behind the entryway door. There was no room for it in the bathroom proper.

There are 19 Tipis’ in this Village, a swimming pool,

…and several vintage cars on the property. I couldn’t resist making an image of the old WigWam Motel Van. 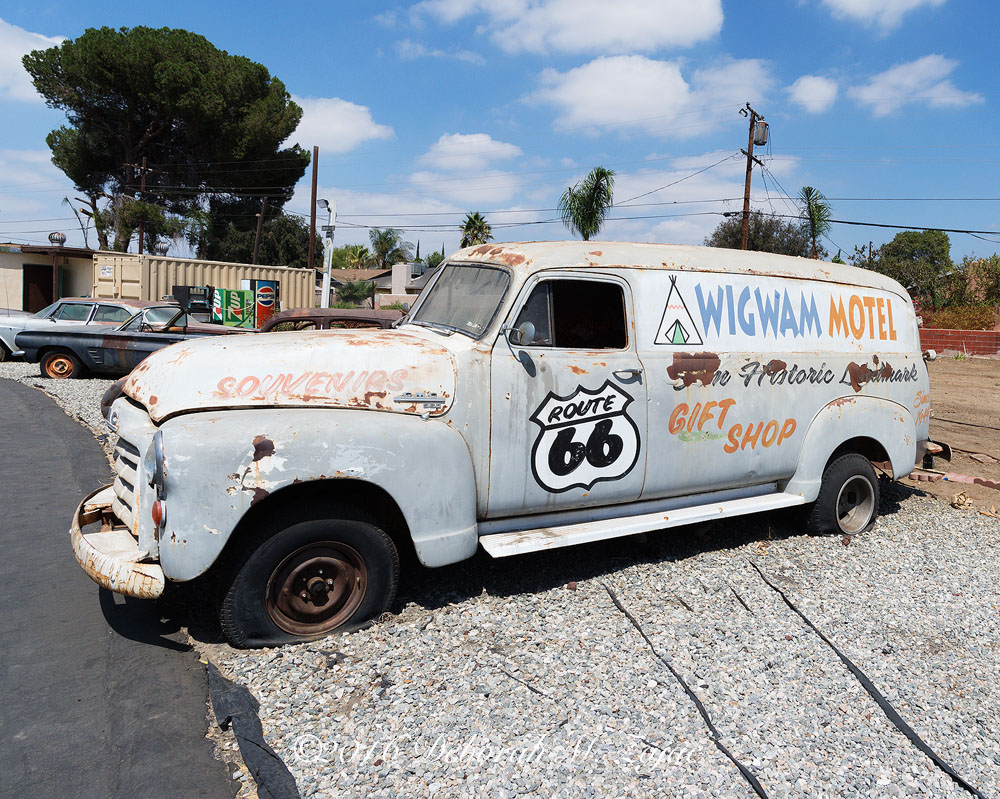 “The Wigwam Motels, also known as the “Wigwam Villages“, is a motel chain in the United Statesbuilt during the 1930s and 1940s. The rooms are built in the form of tipis, mistakenly referred to as wigwams.[3] It originally had seven different locations: two locations in Kentucky and one each in Alabama, Florida, Arizona, Louisiana, and California.

Unlike the one arch of wigwams in other surviving villages, Village #7 has a double row of wigwam guest rooms. They total 19 in number, as well as a base for what seems to be another never-completed wigwam in the back of the property. A central building is currently used as an office, with a lobby that is open 24 hours a day. There is also a swimming pool, a large grass front and palm trees surround the property.

The property had become very run down and rooms were rented by the hour, aggravated by a sign advertising “Do it in a Tee Pee” that is still on site in the back.[12] The complex underwent renovation, for which the National Historic Route 66 Federation awarded the Cyrus Avery Award in 2005.[13][14] Attention to detail was the main focus during renovation, as the wigwams lost their zigzag pattern.

“U.S. Route 66 (US 66 or Route 66), also known as the Will Rogers Highway, the Main Street of America or the Mother Road, was one of the original highways within the U.S. Highway System. US 66 was established on November 11, 1926, with road signs erected the following year.[4] The highway, which became one of the most famous roads in America, originally ran from Chicago, Illinois, through Missouri, Kansas, Oklahoma, Texas, New Mexico, and Arizona before ending at Santa Monica, California, covering a total of 2,448 miles (3,940 km).[5] It was recognized in popular culture by both the hit song “(Get Your Kicks on) Route 66” and the Route 66 television show in the 1960s.

US 66 served as a major path for those who migrated west, especially during the Dust Bowl of the 1930s, and the road supported the economies of the communities through which it passed. People doing business along the route became prosperous due to the growing popularity of the highway, and those same people later fought to keep the highway alive in the face of the growing threat of being bypassed by the new Interstate Highway System.

US 66 underwent many improvements and realignments over its lifetime, and it was officially removed from the United States Highway System in 1985,[2] after it had been replaced in its entirety by segments of the Interstate Highway System. Portions of the road that passed through Illinois, Missouri, New Mexico, and Arizona have been designated a National Scenic Byway of the name “Historic Route 66“, which is returning to some maps.[6][7] Several states have adopted significant bypassed sections of the former US 66 into the state road network as State Route 66.”

We had a fun time and crammed a lot in over the course of the week-end.  I have more images from Calico Ghost Town, and Barstow’s train station that I’m saving for future posts.