I had a fun week-end in Moab, Utah with friends Alex and Theresa chasing the stars. Our goal was to shoot the Milky Way at Corona Arch, but the first night was really cloudy so we went to Dead horse Point in Canyonlands State Park for sunset. We didn’t have much color, but the clouds were dramatic.

Saturday morning my alarm went off at 3 A.M. I snoozed for a few minutes then got up, dressed then the 3 of us left the hotel and  were at the Trail head to Delicate Arch at 4:10 A.M. It’s a 1.5 mile hike up to Delicate Arch with a 500 ft elevation gain. It took us 42 minutes to ascend to Delicate Arch in the dark. (we had head-lamps)

Not much color this morning facing this direction: South-southeast, but still pretty. While waiting for Golden Hour we met Adonis Farray who is from Canada. We all hiked down together then parted ways. Starving we headed to Moab for breakfast. We went to the Jailhouse Cafe and had just put in our order when in walked Adonis! We invited him to our table. Over the course of our conversation we discovered he hadn’t ever shot the Milky Way so of course we invited him to join us if he had the time. He altered his plans and stayed another day in Moab in order to join us. He will tell you I held a gun to his head. 🙂 It didn’t take too much arm twisting to convince him it was worth a second hike up to Corona Arch.

After breakfast we all headed back to our hotel rooms to take a nap, and prepare for our upcoming night shoot. I woke up before my alarm and so did Theresa so we went for a quick swim at the pool then went back  to shower, and meet Alex for dinner before heading up to the Corona Arch trail-head where we would meet Adonis.

We started the hike up to Corona Arch about 7  P.M. The outside/ambient temperature was 101 degrees. You start climbing straight-away up a dirt and rocky path which soon levels out  for a short distance then it meanders up through a canyon; you cross one set of railroad tracks then continue up the path. Soon the path gives way to sandstone and red rock. You hike across a steep rock with a well-worn path in places and no trail at all in other places, but it is marked along the way with cairns, there’s a part of the rock that slopes so you’re walking on an angle but there’s cable to hold on to which helps. Then you begin to climb up the canyon wall following the cairns.
Not too long after you leave the cable behind you come to another cable that helps you climb a much steeper, but short rock. There are shallow foot holes cut into the rock face that make the 15 foot climb much easier. I took this image of the cable back in Feb. with my iPhone. That boy about 10 yrs old ran up the rock opposite the cables- too impatient to wait for us to go up then he waited for his parents at the top.

With that challenge behind us we continued on a short distance only to meet with another steep rock to climb, but a ladder is there to help you up, or you can hike up and around it which is what I did this trip. This image of the Ladder I took back in Feb. with my iPhone

By now you are hundreds of feet high above the canyon floor hiking across the canyon wall on a huge slip rock ridge with a gentle uphill slope that leads you right to the Arch.
The 1.5 mile hike up to the Arch is packed with fun and challenging terrain. Here’s how the Arch looked when we got up to it. Taken with my iPhone 5 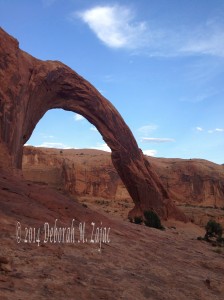 Alex had checked our calculations for the night shoot before we left the hotel using Stelliarum so we had a pretty good idea of where the Milky Way was going to rise. We set up and waited for it to get dark enough to see it.
The temperature started cooling off about 9 P.M. and by 9:30 P.M. it was dark enough to see more and more stars shining bright against the darkening sky.

Theresa brought along a strong flashlight for light-painting. While we were making images of the Arch in the Blue Hour with Theresa light-painting it she stopped and said, “I hear rustling in someone’s back pack. Like animal critter kind of rustling noises.” We all stopped what we were doing to investigate. Turning the light beam over to the pack Theresa saw a mouse in Adonis’ pack! Adonis had left it open and the mouse was trying to get his trail mix. The light beam, and Adonis poking his pack scared the mouse who came running out of the pack and straight into one of the holes in the rock behind us, but he came out of that hole just as fast with angry wasps on his tail! We discovered earlier that all the holes in the rock behind us were filled with wasp nests. We were set up in front of them, but far enough away not to disturb the wasps. The mouse got away up and over the rock and thankfully we didn’t see it or the wasps again.

We hoped we would have breaks in the clouds giving us some kind of view of the Milky Way and we got lucky! Adonis said he’d put in the order with the weather Gods. 🙂 We shot for a couple of hours then we packed up, and with head-lamps lighting the way we started to make our way down from Corona Arch.  With our lamps on the white light we were assaulted by little gnat like bugs. Yuk!

Our Theresa got a touch of sun exhaustion and didn’t feel good at the start of the decent. Thankfully she was able to hike down without difficulty- she was tired, hot, nauseous, had a head-ache, and thirsty despite drinking 64 ounces water that day. By the time our plane landed late Sunday afternoon she was looking and feeling much better.

Our day for the Milky Way shoot started Saturday July 26th at 3 A.M. and ended when I went to bed on Sunday July 27th at 1 A.M.  We got a lot of hiking in. 8.2miles total, and I had a lot of fun with dear friends, and  new friend from Canada Adonis.