Several months ago I went birding near Sacramento, CA. to look for two exotic ducks, one was the Wood Duck which I blogged about here.  The other was the Mandarin Duck.

The week before I visited the pond there were two pair at the pond, but the morning I went there was only a lone male.  He’s gorgeous don’t you think?

He sought the shade of a palm tree, but soon came out from under again, thankfully! 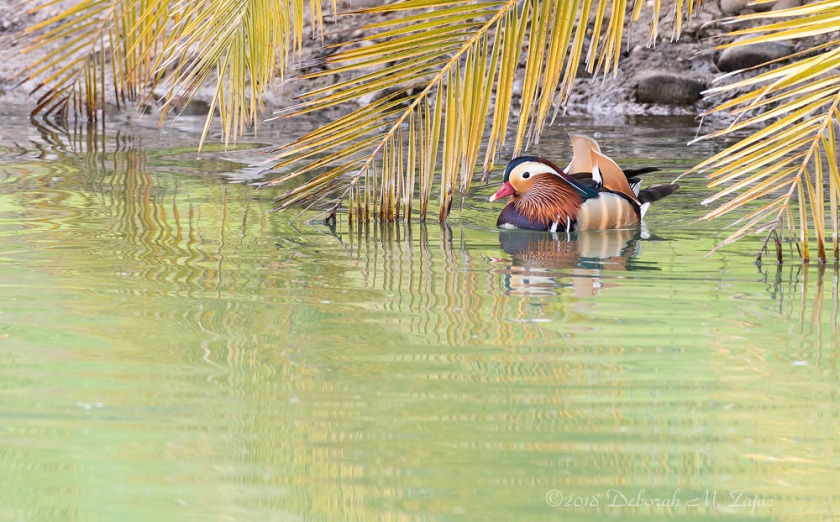 Here are several facts about the Mandarin Duck:

The Mandarin Duck Drake is widely considered the world’s most beautiful of the ducks. It’s a native of China and Japan.  They favor small wooded ponds and avoid large bodies of water.

There are limited populations in the United States; they’re usually escapees from captivity.  China exported thousands of Mandarins, but the trade was banned in 1975.

They are wonderful fliers, able to fly through trees, with remarkable agility.

They will often perch in trees, but the female will lay her eggs (9-12 eggs) in a hole or cavity of a tree, or if a nesting box if one is available.  Once the Female has gathered her brood she takes them straight to the water!  Mandarin Ducks only pair up for a season. New pairs form again in the Fall/Autumn. ~https://www.livingwithbirds.com/tweetapedia/21-facts-on-mandarin-duck

I was thrilled there was still one there for me to see and photograph.