Sometimes you do get an opportunity to redo a shot. On my New Year’s Photography Trip we planned to shoot Mobius Arch in Alabama Hills on our first morning there. The last time I was there to shoot a sunrise I was a bit late and missed the “blue period”. I’ve been wanting a “do over” since.  This time we left in plenty of time, and we didn’t stop for coffee. We weren’t the first in the parking lot and we thought as we hiked out to Mobius Arch that there would be someone already there which meant we wouldn’t have the choice spot on the boulder to shoot from.

We were so lucky; no one was there! Behind the Arch is a large boulder most photographers set up on. My 3 friends  and I sat huddled together with our tripods and packs waiting for sunrise. I framed up Lone Pine Peak through Mobius Arch with the first lights of day lighting it. I think that the stars in the upper left corner is The Great Square of Pegasus.

About an hour later we were rewarded with Alpine Glow. The  craggy mountain tips on the right that you see with Alpine glow is part of Mt. Whitney.

As we were shooting and waiting for the light a couple of guys hiked up. It was their car we’d seen in the parking lot when we arrived. They took a wrong turn and got a bit lost before finding the right trail.  We made a bit more space so they could shoot too. They were shooting over our heads for the Alpine Glow show. It’s always fun to meet other photographers when out and about. Turns out these two were also from the Bay Area. Small world!

I gave up my spot on the rock to Sasha. Then I turned around and saw the sun crest the White Mountains.

We said farewell to Sasha,  and his friend  then we drove around the park scouting out other locations to shoot. We found another arch and some neat formations. Famished we left the park and headed into Lone Pine for a hearty breakfast and much-needed coffee.

UPDATE: On a whim I did a photo search on flickr for other shots taken this morning at Mobius Arch and found this photo by Photosuze! You can’t see too much of me, but I’m behind the guy in blue who is my friend Dali, I’m wearing a white coat, pink hat, and my face is to my camera. My friend Alex is behind me sitting on the edge, and you can just make out my friend T’s hat. You see I wasn’t kidding there isn’t much room on that rock! 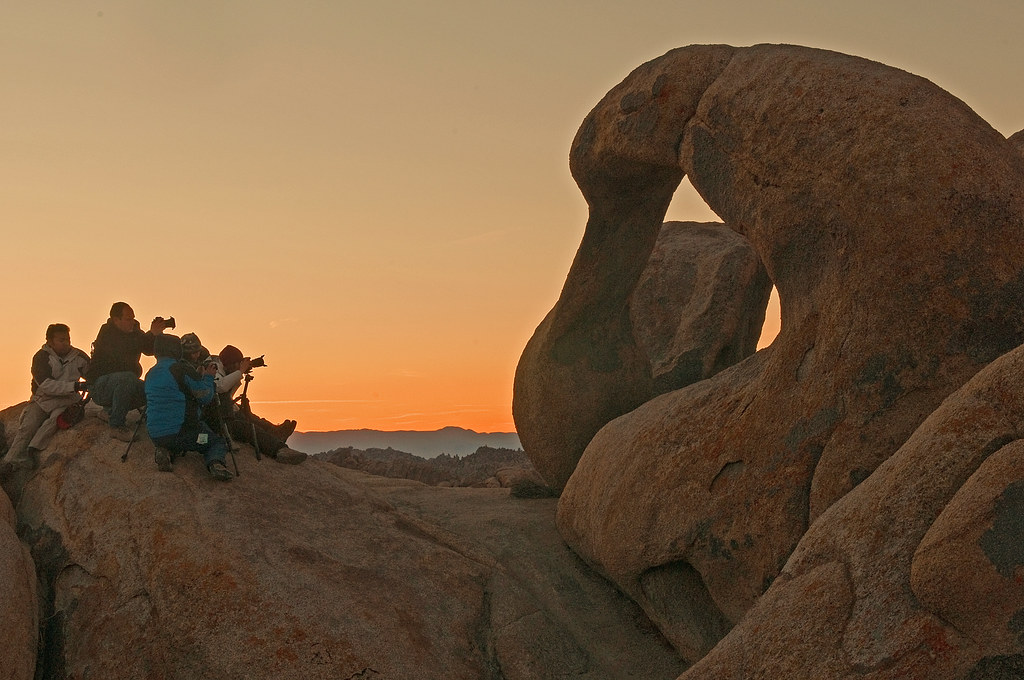 10 thoughts on “Sunrise in Alabama Hills”